The newly formed Social Eatertainment Group, owning O’Learys and Harrys, now announces the acquisition of a significant minority stake in the popular Swedish karaoke brand Sing Sing. This further strengthens the Group’s portfolio and vision to be leading in Europe within eatertainment – i.e. food and drinks in combination with social games, activities, events and sports.

Sing Sing offers a true eatertainment experience with its concept with private Japanese style karaoke rooms for groups combined with colorful cocktails and a mix of classic and modern Vietnamese street food. Social Eatertainment Group has acquired a significant minority stake in the company with the ambition to increase the ownership over time.

– We see a great potential in Sing Sing, both in the brand itself and the people behind it, and due to the fact that Sing Sing in a short time has become the go to place for karaoke in Gothenburg. We have set an ambitious growth plan for Sing Sing starting in the Nordic markets followed by a launch in the rest of Europe, says Kenneth Lorentzen, CEO of Social Eatertainment Group.

Sing Sing opened their first karaoke bar in 2017 in Gothenburg and it was a great success from day one and is still often fully booked weeks in advance. The second venue is opening in Malmö in Q1 2022 and it will be followed by several more openings in the near future.

– When we founded Sing Sing we had the ambition from start to create a scalable concept. In Social Eatertainment Group we’ve found the best possible partner with their great experience and knowledge within eatertainment and operating large franchise chains, says Sebastian Popescu, CEO of Sing Sing.

The goal is for Social Eatertainment Group to become Europe’s leading eatertainment company with chain sales above €1 billion in 2025. The ambition is to have more than 400 venues within the group by the end of 2025.

– With O’Learys, Harrys and Sing Sing we have a very strong portfolio of differentiated eatertainment brands. We look forward to growing with these brands together with new and existing franchisees and partners. We’re also in dialogue with several other eatertainment brands who are looking to accelerate their growth plans and want to enjoy the benefit of being part of our strong group, continues Kenneth Lorentzen.

Social Eatertainment Group was founded in 2021 and is the owner of O’Learys and Harrys and a minority owner in Sing Sing. O’Learys was founded in 1988 and the brand offers an energetic social eatertainment experience with a blend of broadcasted sports, games, and activities in an American inspired setting. Harrys is a well-known brand that has managed to mix a nice Swedish food experience with social activities such as dinners shows, theme evenings and wine tastings. Sing Sing was founded in 2017 in Gothenburg, Sweden and is a karaoke bar with private rooms and Vietnamese street food. 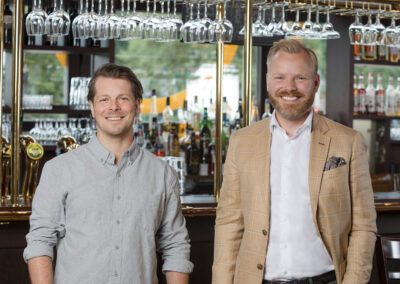 You can find out more about which cookies we are using or switch them off in settings.

A cookie is a small text file that helps the support system recognize which type of content is visited on our website. The information that is saved may be data about visitors’ browsing habits and use of our website, which browser our visitors use and how they move between the various websites that Social Eatertainment Group collaborate with.

Social Eatertainment Group uses statistics in aggregated form about users/traffic and traffic suppliers. Such statistics never contain any personal information, however. Everything is anonymous. IP addresses are not saved in Social Eatertainment Group’s database, which stores behavior on the website. Therefore, the information about you can never be linked to your identity. Your IP address is saved for security reasons only in cases where you actively register on the website or download our app.

Strictly Necessary Cookie should be enabled at all times so that we can save your preferences for cookie settings.

If you disable this cookie, we will not be able to save your preferences. This means that every time you visit this website you will need to enable or disable cookies again.